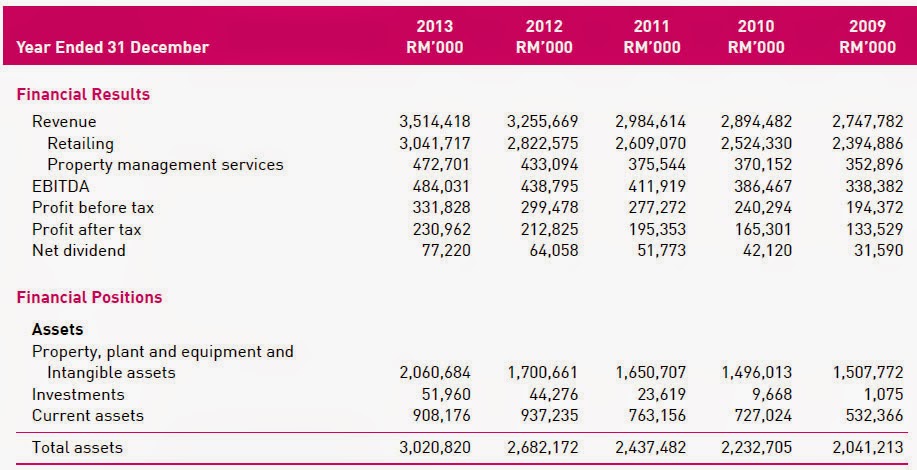 For the year under review, revenue of retail business segment grew by 7.8% to RM3.042 billion. The growth was contributed mainly by the overall better performance from existing stores, higher contributions from new stores that opened in the last year. Same stores registered a growth of 4.7%.

The individual performance of the stores had been mixed, characterised by the unique characteristics
of the store concerned and the local operating environment rather than the general retail industry
trend.

During the year under review, AEON Kulaijaya store was opened for business to customers on 27 November 2013 and has contributed marginally to the overall revenue. AEON stores which have achieved
double-digit growth ranging from 11.2% to 13.5% were Bukit Indah store, Rawang store and Bandaraya Melaka store, mainly due to the growing number of customers and loyalty members’ base and the benefits they derived from the increased and completion of the surrounding housing developments.

AEON Ipoh store which has undergone renovation during the year and which was affected by the opening of AEON Ipoh Station 18 store in March 2012 and the stiff competitions nearby, still managed to achieve a marginal growth of 0.5%. AEON Taman Maluri store’s performance was flattish, in part
due to infrastructure developments around its store which hamper customer traffic.

However, AEON stores in Wangsa Maju and Bandar Baru Klang, which had their general merchandise department undergone renovation during the year, registered lower performances of 3.8% and 0.9% respectively against their previous year’s performances. AEON Bandar Sunway store also recorded a lower performance of 1.8% against its previous year, mainly due to the stiff competition within Sunway Pyramid shopping mall itself.

During the year under review, to keep abreast of the changing demands of consumers and at the same time, to counter competition and differentiate itself by offering customers the best value in terms of variety of merchandise, freshness and pricing, the Company embarked on a refurbishment programme to upgrade its general merchandise stores in AEON Ipoh, Wangsa Maju, Bandar Baru Klang and Cheras
Selatan, featuring new look layouts and merchandise assortment zoning for better customer shopping experience.

For the property management services business, the year under review was very challenging as the retail industry witnessed addition of new retail space and retail tenants were generally spoilt for choices.

Despite these challenges, the overall performance of AEON shopping centres remain steady and sustainable, with the occupancy rate maintained at 93.7%. The Company’s property management services business achieved revenue of RM472.7 million for the financial year ended 31 December
2013, representing an increase of 9.1% over the same period last year. The main factors that boosted our revenue in this core business were the contributions from the operations of the newly opened shopping centres of AEON Ipoh Station 18 and AEON Seri Manjung which opened in March 2012 and
December 2012 respectively, as well as additional income from AEON Mall Kulaijaya which opened in November 2013. On same shopping centres basis, there was also a growth in revenue of 3.2% in the period under review.

The Company’s vast experience in the management of shopping centres was largely responsible for this continuing strong performance. Riding on its well-designed shopping centres, AEON had continued to place emphasis on ensuring that its shopping centres are always well maintained and continuously enhance shoppers’ shopping experience.

Some of the affirmative actions that the Company took during the year were to continually review the tenant mix, so as to successfully maintain the attractiveness of the malls to shoppers and tenants alike. During the year under review, the Company had also carried out major renovation to upgrade its old AEON Bukit Raja Shopping Centre so as to better position the shopping centre in its competitive environment and provide its loyal shoppers with a new refreshing look. The Company also made concerted efforts to improve operational efficiency in other areas such as car park management,
security and safety measures for shoppers.

Malaysia’s economic growth in 2014 is expected to be broader based, supported by exports and domestic demand, in tandem with the world economic recovery. Nevertheless there could be moderation in private consumption due to the ongoing subsidy rationalisation measures taken by the government which had resulted in higher cost of living. The higher prices of products and services could see inflation
trending up in 2014.

Despite that, with steady income growth and healthy employment market conditions, consumer sentiment and spending is likely to remain positive though cautious in 2014. The short term outlook for retail industry will remain very challenging as competition increase and retailers compete for the consumer dollars and cope with changing consumers’ behavior.

The Company had, during the year under review, entered into a joint venture arrangement with Index Living Mall Company Limited, a Thailand based furniture company, to jointly set up a company selling home and office furnishings in Malaysia. The first outlet is scheduled to open by end of 2014. The Company is confident the joint venture would enhance its merchandise competitiveness and tenant mix.

On its property management business, revenues and earnings are expected to remain steady and consistent. The Company will continue to employ strategies to attract and increase shopper traffic to its malls through provision of right tenant mix, exciting promotional and thematic events, complemented by proper maintenance and customer services.

The Company remains committed to its mid term expansion plan. In 2014, the Company’s MaxValu Kota Kemuning’s operations which had ceased by end of March 2014 will be relocated before the end of the year to a new site at Gamuda Walk Kota Kemuning. The Company will also discontinue its store and property management business in AEON Seberang Prai City Shopping Centre and move the businesses to its new outlet at AEON Mall Bukit Mertajam. The Company is on schedule to open its new mall in Taiping, Perak and as an anchor store in a new mall in the central business district of Kuala Lumpur. The Company had also during the year announced the purchase of another piece of land in Johor for its future expansion. The Company will continue to identify strategic locations for its store and mall development.