The rationale for the merger leading to the formation of Sunway was to create a property and construction colossus with a stronger balance sheet and increased capacity to take on larger landmark projects. That vision is now being realised as evidenced by the Group’s ability to team up with large and reputable partners and acquire sizable parcels of land in Iskandar Malaysia. Coupled with the award of several substantial construction projects in Iskandar to Sunway’s Construction division, Sunway is becoming a proxy for the development of Iskandar Malaysia, a huge privilege given the indisputable growth potential of the region.

The division generated continued growth in its recurring income base. The division’s latest addition, Sunway Pinnacle, a 27-storey MSC status office tower in Sunway Resort City, was completed at the end of 2013. This adds 580,000 square feet of net lettable area under the division’s management and Sunway Pinnacle is expected to welcome its first tenant by March 2014.

The Group continued to invest in asset enhancements. At Monash University Malaysia campus, we added two academic blocks with 230,000 square feet of net lettable space, which will be fully let by Monash University. In addition, we started the rejuvenation of Sunway Putra, with extensive renovations of Sunway Putra Mall and Sunway Putra Hotel. These works are expected to complete in 2015.

Due to these features and its strategic location within the integrated Sunway Resort City development, there have been a number of inquiries on leasing for the tower. As at April 2014, the division has secured tenants for 40% of the tower with quite a few tenants still at the negotiation stage. The secured tenants include prominent multinationals like Pepsi-Cola, Huntsman, Ecolab and Hitachi Sunway. Sunway Pinnacle welcomed its first tenant in March 2014.

The Healthcare division delivered another year of outstanding revenue growth with revenue increasing 20% to RM196.6 million from RM163.9 million in 2012, driven by higher capacity utilization and greater demand for quality healthcare services. We continued the transformation programme in the division, and further enhanced Sunway Medical Centre through equipment modernization, quality accreditation and capacity expansion.

The Property Investment and REIT division is well into its Asset Expansion Programme, initiated just after the merger in 2011. Sunway Pinnacle is the first property to be completed following this programme and will be followed by Sunway University’s New Academic Block in 2014 and
Sunway Pyramid Phase 3 and Sunway Velocity Shopping Mall in 2015. These additions are significant as they will catapult Sunway into one of the leading private landlords in the country with Assets Under Management of more than RM8.0 billion. At the same time, upon completion of
Sunway Pyramid Phase 3, Sunway Velocity Shopping Mall and the Sunway Putra Mall refurbishment, the division will be one of the largest shopping mall operators in Malaysia.

Operationally, the division will be spearheading an initiative to generate greater loyalty to Sunway’s businesses and tenants of Sunway properties via the Group’s first Loyalty Programme, Sunway Pals. Sunway Pals allow members to accumulate points at participating retail outlets in Sunway Pyramid and most other Sunway-owned establishments like Sunway Lagoon, Sunway Medical Centre, Sunway University, Sunway Hotels and even property purchase from Sunway Property. This initiative is expected to expand to the other Sunway malls nationwide and will be an important tool to promote cross selling and customer retention.

In 2013, Sunway Medical became the first hospital in Malaysia to acquire a Siemens Flash Speed Dual Source CT Scanner with Stellar Detector. The new equipment is the fastest emergency CT with split-second scanning. Its low radiation dose and noise affords organ-sensitive dose protection and is able to perform pediatric scans without sedation. This permits quicker scans, better results in the
diagnoses of bone disorders and guide surgeries, biopsies and radiation therapies. Coupled with the division’s investment in the Siemens 3.0 Tesla Magnetic Resonance Imaging (“MRI”) in the previous year, Sunway Medical’s Radiology department is now equipped with the most complete and
advanced imaging equipment in the market.

Besides medical equipment, the division had also sought to optimize the use of its physical space by creating additional clinic space and opening additional wards and beds. During the year, 26 beds, 21 daycare beds and 3 High Dependency Unit beds were added while 36 new clinics were created
allowing for new specialist doctors to add on the centre’s array of specialties. The twelfth and final operating theatre was also finally commissioned and for the first time since the completion of Phase 2 of Sunway Medical Centre, the hospital is running at its built capacity.

The most important development for the division in 2014, though, is the expected commencement of construction of Phase 3 of Sunway Medical Centre. The new extension entails a 10-storey building comprising 30,000 square meters of space which will house, amongst others, a new Radiotheraphy
Centre with 2 radiotheraphy bunkers and 1 brachytheraphy bunker, in addition to a Nuclear Medicine Centre with PETCT and SPECT-CT scanners. Other facilities in the extension include Oncology wards and clinics, Gastroenterology & Hepatology clinics, 1 level of outpatient clinics, 5 levels of
wards, a Digestive Health Centre and a Dialysis Centre. The entire development is estimated to be completed by 2017.

Sunway upholds a “Build, Own, Manage” business model, which ensures that Sunway remains the largest co-investor in its township developments. With this unique model, continuous improvements are made to the townships in tandem with the communities’ growth, epitomising Sunway’s unfailing commitment to its communities. This includes investments in a township’s accessibility, connectivity
and security through its Safe City Initiative. For example, in Sunway Resort City, Sunway has invested in a one kilometer canopy walk throughout the township, a privately funded road and highway expansion, and a partnership with the government to build the nation’s first elevated Bus Rapid Transit system

In Klang Valley, the division looks to launch its second phase of service apartments in Sunway Velocity, dubbed V-Residences 2. The entire development will comprise two residential towers,
to be launched in two separate sub-phases. The first launch of about 334 freehold units will have a GDV of approximately RM250.0 million, and is targeted to be opened to the public in the first half of 2014. （现在7月，开始卖，开始有收入贡献）

Slightly further from the City Centre, Sunway will be offering an exclusive, low density living experience at the peak of Sunway Eastwood in Puchong South. The development comprises
66 units of Park Villas in a gated and guarded community perched on an elevated enclave with a spectacular view of the development’s Central Park and its surroundings

In Johor, Sunway Iskandar’s first launch, Citrine at The Lakeview Precinct, will comprise retail suites, offices and service apartments. In line with Sunway Iskandar’s philosophy
of Nature’s Capital City, Citrine seeks to integrate the contemporary architecture of its structure with the timeless beauty of its 7.8-acre emerald lake and lush greenery. Citrine forms part of Sunway’s 1,770-acre integrated township in Iskandar, which will be modeled after the highly successful award-winning Sunway Resort City. Surrounding catalytic attractions such as Legoland, Pinewood Iskandar Malaysia Studios and Edu City, as well as the Singapore Second Link are in close proximity, making this development even more compelling.

Finally, in China, the division will likely witness the long-awaited launch of the first phase of its project in Tianjin. Barring further unforeseen circumstances, the development should debut its
first phase by the third quarter of 2014.

We’re honoured to announce that we hit a take-up rate of 90% at our recent launch of the Sunway Velocity Residences 2, Service Residence. Find out how you can be part of this upcoming integrated development in KL at  www.sunwayvelocity.com. 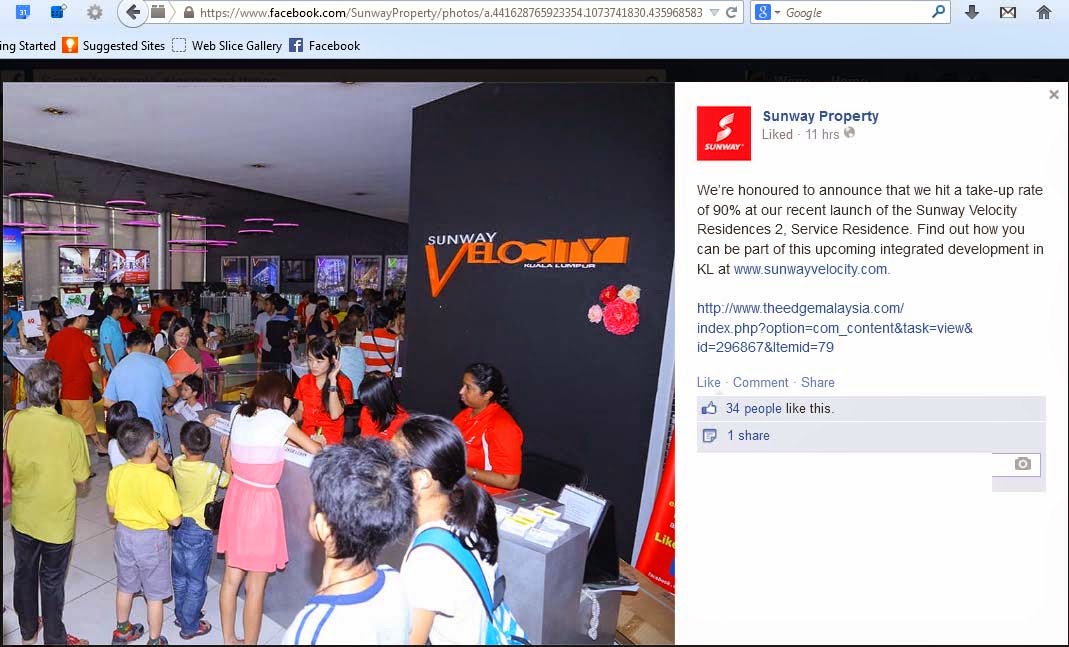 He added that buyers also love the convenience offered by the surrounding area. “Facilities and amenities are all located within a short distance away. Sunway Geo will benefit from the integrated components of Sunway Resort City (SRC). The BRT and canopied walkway will connect Sunway Geo to other components in SRC, namely retail, residences, offices, hospitality and leisure.”

Sunway Geo is also located in the growing education and healthcare precincts of SRC. The new campus of Sunway University is set to be completed by 2015 while Sunway Medical Centre is undergoing expansion plan with the construction of a new block. These new developments are set to increase the convenience for the community in Sunway Resort City.

Sunway Geo will also be secured by Sunway’s own security team and CCTV under its Safe City Initiative.